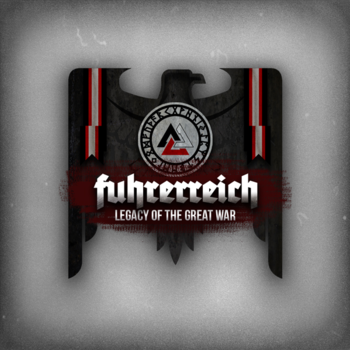 What if Germany lost World War 1?
"We should have known better after the Great War."
— Gerd von Rundstedt

It is 1918, and the great German Empire loses the Great War. The victorious Entente reshapes the borders of Europe, dissolving the Empires of the Central Powers while imposing harsh treaty terms on the new German republic. It is now 1936, and the world has changed: Spain is in a brutal civil war, the United States suffers under The Great Depression, the Soviet Union grows more powerful each day, and a revanchist German Reich is preparing for another Great War, now under the iron fists of Führer Adam Dressler... wait, that's not what happened.

Führerreich: Legacy of the Great War is a Game Mod for Hearts of Iron IV and has an interesting premise: The mod is actually a Alternate History based in a fictional book in the world of Kaiserreich: Legacy of the Weltkrieg, already an Alternate History where Germany won World War 1, and, as such, many of the differences from our timeline comes not from a Point of Divergence (although there is one) but from the view that someone from Kaiserreich's universe would have. For example: in our timeline Italy was promised western parts of the Austro-Hungarian Empire, new colonies in Africa and parts of Turkey, however, in the Treaty of Versailles, the prominent school of thought was Woodrow Wilson's self-determination, which preferred giving each ethnicity a nation-state and without its promised colonies, Italy would later give rise to Fascism. Without Woodrow Wilson becoming prominent in the Kaiserreich universe, self-determination would never be a major matter of post-WW1 negotiations and Italy would preserve their kingdom, Führerreich is full of examples of Alternate History and Divergences that might make less sense for someone from our timeline but seem reasonable for someone from Kaiserreich's universe. Central to all of this is of course, the titular Führer Adam Dressler, a fully fictional character who leads a radically nationalist Germany under his own Valkist ideology.

To put it simply, Führerreich is The Grasshopper Lies Heavy to Kaiserreich's The Man in the High Castle.

and a official subreddit here

Compare with The New Order Last Days Of Europe, Red World, and Red Flood for other Hearts of Iron Alt-History mods, and Kaiserreich: Legacy of the Weltkrieg for its parent mod.