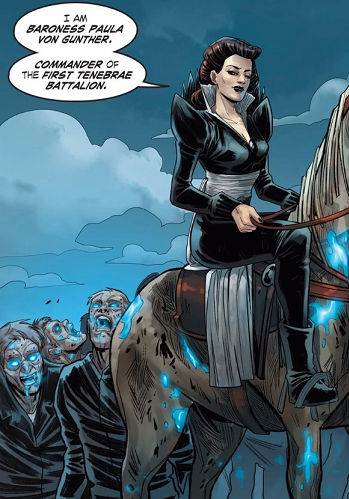 Dr. Frank-N-Furter: Go on, Dr. Scott... or should I say, Dr. von Scott?!note SIEG HEIL!
Brad: Just what exactly are you implying?note THAT HE'S A NAZI, ASSHOLE!
— The Rocky Horror Picture Show
Advertisement:

Want to give an ambiguous character that extra bit of onomastic intrigue? Tack a "Von" on to their last name.

Technically, von is merely a German preposition which approximately means of or from which appears mostly in names of families that belong (or once belonged) to the nobility. To set themselves off from commoners with "von" in their names, German-speaking noble persons sometimes prefer the abbreviation "v.". The nobility was abolished as a privileged estate in 1918, since then "von" and titles of nobility like "Graf" (count) or "Ritter" (knight) are treated as mere parts of the name. Note that in German, Von is not capitalized unless the first name is missing (compare "Helga von Trope" and "Frau Von Trope"). A permanently capitalized "Von" is mostly English usage.note In the previous example, neither "von" would be capitalized in German, regardless of whether it was preceded by a given name or a form of address. Before the 20th century, it was quite common to translate "von" as "de" in French texts and German-speaking diplomats would sign that way under treaties (which explains why even today it's not uncommon to see Germanic names preceded by that particular Latin preposition).

Some German-speaking noble families have more elaborate particles before their name such as "von dem" (shortened form: "vom") or "von der" (both mean "of the"), others have "zu" or "zum" (roughly "at", which usually indicates the actual or former place of residence), some have "vom und zum". There are also both noble families which have "SURNAME von OTHER NAME" or "SURNAME zu PLACE NAME" (as usual, there are exceptions, such as names of the pattern "Meyer zu PLACE NAME" and e. g. the poet August Hoffmann von Fallersleben, who added "von Fallersleben" after his birthplace to distinguish himself from other writers called Hoffmann). And there are ones that combine "von" with "nobility indicators" from other languages such as with many surnames containing the slavic suffix "-ski" or "-sky" or Franco-German combinations as the noble Huguenot family von Arnauld de la Perière.

At its most basic level, "von" merely exists as a marker of Germanic origin, high origin or both. However, character namers have seen fit to use the syllable to make two main branches of the Von Trope Family tree.

Naturally, there may be crossover between these two subsets.

When the character just happens to have that as part of their family name, with no particular cultural significance meant to be attached (though in countries with a long history of democracy, the elitist overtones of the prefix often cause it to be dropped), it's not this trope or any other one.

The Dutch equivalent, "van", may be used to imply the same categories, though "van" is a lot more, well, common (in both senses: "frequent" and "having ancestors who were commoners rather than nobility"). In America, a Dutch Preppy Name is often a better shorthand to signify old money and "WASPiness" than an actual Anglo-Saxon one would be.

The trope name is a pun on the von Trapp family, of The Sound of Music fame.