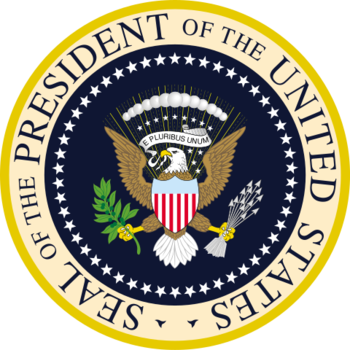 Ladies and gentlemen,note And if it's the State of the Union, Mister/Madam Speaker. the presidents of the United States! ("Hail to the Chief" starts playing.)

Advertisement:
Despite what Histeria! may have said about his being president for one day between Polk and Taylor, any attempts to put David Rice Atchison

on this list will be dismissed in the traditional manner.Context President Polk left office on Sunday, March 4, 1849; President-elect Taylor refused to be sworn in until Monday. In theory, this could have made Senate President pro tempore Atchison the Acting President for that day, but only if Taylor was incapacitated. So will any attempts to add John Hanson

or any other presidents of the Continental Congress.

An urban legend, popularized by Ripley's Believe It or Not! in 1931, claims that there is a curse upon the presidency. This curse, variously known as the "Curse of Tippecanoe", "Tecumseh's Curse" and the "Zero-Year Curse", states that any president who is elected in a year ending in a zero (1840, 1860, etc.) will die in office or have a near miss. It was allegedly placed upon William Henry Harrison by Tecumseh's brother Tenskwatana during the Indian wars and the War of 1812, in which Harrison won two decisive battles against Tecumseh in present-day Indiana and Ontario (the latter leading to Tecumseh's death). Whatever the curse's validity, it was apparently "broken" by either Ronald Reagan (if deaths alone count), or George W. Bush (if near-misses count as well)note Unless you count that one time some guy in the country of Georgia threw a grenade

at Bush and Georgian President Mikheil Saakashvili; the grenade did not detonate. as both survived to serve two full terms. Only time will tell what happens after the 2020 election.note Joe Biden, who won the 2020 presidential election, indirectly lampshaded the curse, stating that his running mate will need to be prepared to step into "the most important job in the White House" at a moment's notice.

There is also a band called The Presidents of the United States of America; however, no holder of this office has yet been a member of the band. However, the band members did a parody of the presidential race in which each member had a campaign video to be elected president ... of the Presidents. They did play at the White House, by Chelsea Clinton's request, though. Rumor has it, Bill Clinton played sax with them during that show.

Jonathan Coulton has two songs about them: One

("The Presidents") is simply their names and a small factoid about them, and the other

("Washy Ad Jeffy") is a mnemonic device designed to help you remember their names and how many terms they served (by way of the number of syllables in the name). Other songs include this one

With one exception, every American president is descended from King John of England. He's the king from the Robin Hood stories and the one who was forced to sign the Magna Carta. The one exception is Martin Van Buren (Were you expecting Obama?), whose ancestry is Dutch on both sides. All of the other 44 mennote Grover Cleveland was both the 22nd and the 24th, bringing the total to 45 men. to hold the executive office have British blood in them that can be traced back to King John. And even then, Van Buren is still related to King John, as his descent has been traced via separate lines of descent from King John's mother and paternal great-grandparents. In fact, Van Buren was still descended from William the Conqueror, who was also an ancestor of King John, so every president is descended from the Norman king who conquered England.note Thanks to how lineages tend to work, this is actually less unlikely than it sounds (bloodlines either explode or die out very quickly, and aristocrats have a lot of children), but being able to prove it is still pretty impressive.

Some presidents who typically rank very high in "greatest presidents" historian/scholar polls include George Washington, Thomas Jefferson, Abraham Lincoln, Theodore Roosevelt, and Franklin D. Roosevelt. Some who are usually found at the very bottom include William Henry Harrison, Franklin Pierce, James Buchanan, Andrew Johnson, and Warren Harding. A few are more popular in public polls than in scholarly ones, such as Andrew Jackson, John F. Kennedy and Ronald Reagan. There has been some reappraisal of some presidents often ranked neither at the absolute top nor the absolute bottom due to their civil rights record and Values Dissonance, which also partly explains, for instance, why Andrew Johnson was slightly more popular with historians until about the 1960s or so than he is today.

Four of the first five presidents were from Virginia, giving rise to the term "Virginia Dynasty"

though they were not related beyond the trivial. Until The American Civil War most presidents were either Southerners themselves or "Doughfaces", that is, Northerners with Southern sympathies. Since the Civil War, this has turned around quite a bit, with Woodrow Wilson arguably the first with Doughface or Southern leaningsnote He was born in antebellum Virginia, raised in Georgia, and moved to New Jersey but held on to his, shall we say, obsolete racial views. and most presidents from both parties standing more on the side of Civil Rights than the South from the 1950s onwards. (Fun fact: A disproportionate number of presidents have been either New Yorkers or Ohioans, at thirteen. Statistically speaking, this is likely because New York has always been one of the most populous states in the union since the Revolution, while Ohio has been a crucial swing state in presidential elections for a very, very long time.)

For the action film, see Dead Presidents. For the much-desired pictures of dead presidents (plus a few other people), see American Money. For the president of the Confederate States of America during The American Civil War, see Jefferson Davis. For a list of those who were "one life away" from being president, see The Vice Presidents. And finally, for portrayals of the presidency in fiction, see Our Presidents Are Different.

"The next president to lead the way
Well, it just might be yourself one day
Then the press will distort everything you say
So jump in your plane and fly away!"

Alternative Title(s): The Presidents Of The United States Of America