Film / Pandora and the Flying Dutchman 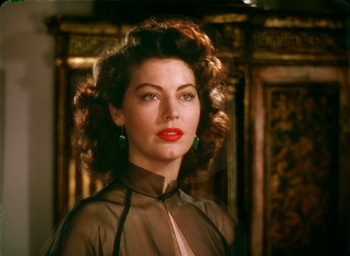 Spain, 1930. Pandora Reynolds (Ava Gardner) apparently worked as a singer at some point but now whiles away her time in the seaside village of Esperanza, allowing men to stare at her. One of her most determined admirers is Stephen Cameron (Nigel Patrick), a race car driver who's attempting to set a land speed record. After he proves his devotion to Pandora by pushing his experimental race car off a scenic cliff, she agrees to marry him.

While she's agreeing to marry him, however, she notices a lavish yacht anchored just off the beach. The yacht, as it turns out, is occupied by only a single person, one Hendrik van der Zee (James Mason). Hendrik turns out to be the Flying Dutchman of mythology. Hendrik has been sailing the ocean waves alone for some 400 years, cursed with immortality and eternal solitude. After he killed his wife, thinking erroneously that she had cheated on him, he ranted at the judge that all women are cheaters and that he could sail the seas forever and never find one that's faithful. Divine intervention then put Hendrik on a ship, manned by a ghost crew, doomed to wander the seas forever.

However, there's an escape clause. Once every seven years Hendrik can step on land. If he can find a woman that loves him enough to die for him, the curse is lifted and Hendrik will get the death he so craves. Pandora, as it happens, is drawn to the dark, handsome Hendrik. And as it happens, she's an exact match for his wife, dead four centuries.