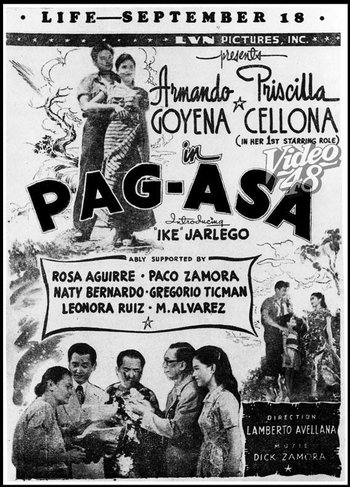 Pag-asa, or "Hope", is a 1951, black and white, Tagalog-language Filipino film, directed by classic movie director Lamberto V. Avellana. Its plot is as follows:

"After their father’s death, Celing (Priscilla Cellona) and her little brother Piding (Ike Jarlego, Jr.) are entrusted to the affluent Don Paco. Enduring harsh treatment from his wife Doña Esperanza (Naty Bernardo), the two flee one night and meet Victor (Armando Goyena), an amusement ride-operator in a city fair. He takes them to his home and his mother (Rosa Aguirre) in the squatter area of Manila, in Intramuros. Hearing Celing sing, Victor’s uncle (Gregorio Ticman) encourages her to enter an amateur singing contest, eventually spreading the beauty of her voice to wide acclaim. Hearing of her fame, Doña Esperanza has other plans …"

The full movie can be found here, for free, online.