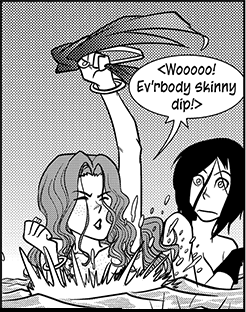 "You shed the city and lots of other things during the drive. By the time I see that water, I'm good."
— Newsanchor Wendy Rieger

on skinny dipping in the Chesapeake Bay
Advertisement:

Skinny Dipping is swimming, but without the swimsuit. In the nude.

Usually, this is used in fiction for several reasons:

As mentioned above, Skinny Dipping is Truth in Television. It was a common practice back before the 1950's or so, when swimsuits were impractical. It is still done today, though. As a matter of fact, some nudist camps which are otherwise clothing-optional make their pools no-clothing. (It's a little known fact that suit fibers just mean something extra to clean out of the filter system.) However, skinny dipping in public places other than nudist areas can be illegal and bring charges of public indecency or even second degree sexual assault.

Oh no! Someone has stolen my clothes!!! Good thing no-one could see you on the Internet.
Feedback

Papi takes a bath in public.

Papi takes a bath in public.