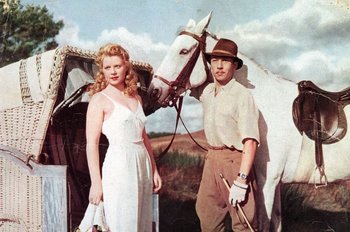 Opfergang ("Sacrifice", aka The Great Sacrifice) is a 1944 film from Nazi Germany directed by Veit Harlan.

Albrecht Froben is a shipping magnate who has come back to Germany after sailing across the world to Japan. (The film either takes place before the war, or in some alternate universe where German shipping goes around unimpeded.). He goes to visit an old friend, an aristocrat named Froebel. When meeting Froebel he also renews his acquaintance with Froebel's stunningly gorgeous Aryan-blonde young daughter, Octavia. Soon, they are married.

However, getting engaged to and marrying Octavia does not stop Albrecht from noticing their neighbor, one Als Flodeen (Kristina Söderbaum, a Chronically Killed Actor in German cinema of the era.) Als is just as Aryan as Octavia and just as gorgeous. However, while Octavia is the Nazi ideal of German womanhood—quiet, nurturing, supportive—Als is a Manic Pixie Dream Girl who likes to do stuff like go skinnydipping, or shoot arrows at a target on a beach, while riding a horse and wearing a swimsuit. Eventually, the reason why Als is such a energetic free spirit is revealed: she has a terminal illness, and is determined to live it up while she can.