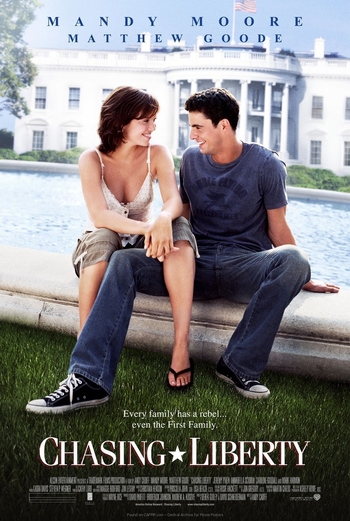 Every family has a rebel...even the First Family.
Advertisement:

You're the President's daughter, and as such you have had some amazing experiences. Travelling the country in Air Force One (thankfully not that Air Force One), living in that fabulous house, touring along the campaign trail, attending posh schools and universities. Of course along with the benefits of your Daddy's post come the trials of life in the public spotlight.

Enter Anna (Moore), the beloved only child of the POTUS, whose only desire is to head out with her bestie for a bit of a road trip across Europe. She and her father come to a compromise, and she is allowed one evening without a Secret Service detail. When Anna discovers that her father, El Presidente, didn't keep his end of the bargain, or his goons out of her life for the evening, she hatches a plan to get back at him.

Thus begins the story of a girl, her father, and the trip that changed their relationship forever... Oh, and there's a romance in there somewhere.