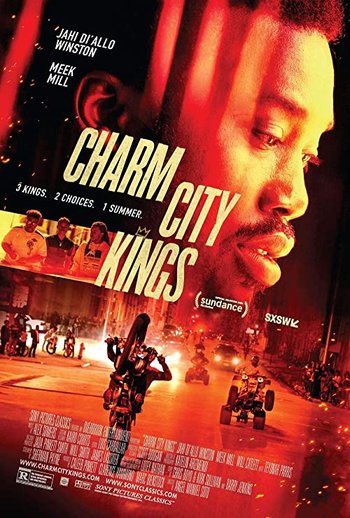 Charm City Kings is a 2020 drama from director Angel Manuel Soto, co-produced by Will Smith and Jada Pinkett Smith. It is based on the documentary 12 O’Clock Boys. It stars Jahi Di’Allo Winston and Meek Mill.

Set in Baltimore, 14-year-old Mouse is an aspiring vet and dreams of joining dirt bike gang Midnight Clique after his late brother Stro inspired him to start riding. When Mouse meets the gang’s leader, Blax (Mill), the man takes Mouse under his wing, which will lead Mouse to decide whether he wants to follow an honest path, or one paved with fast money and violence.

Originally set for a theatrical release, the film premiered on HBO Max in August 2020. It was pulled from the platform in July 2022 in a cost-cutting move by Warner Bros. Discovery.