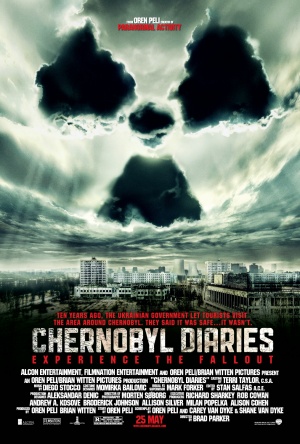 Chernobyl Diaries is a 2012 Horror film directed by Bradley Parker, produced by Paranormal Activity’s Oren Peli, and starring Jesse Mc Cartney, among others. It is based on the book The Diary of Lawson Oxford, also written by Oren Peli.

The film follows a group of tourists exploring the ruins of Pripyat, the town just outside the Chernobyl power plant. After managing to make their way into the city, the tourists and their guide are periodically assaulted by unidentifiable monsters that threaten the lives of all characters involved.

Tropes featured in Chernobyl Diaries include: