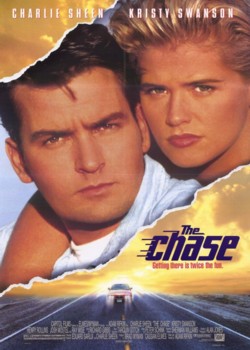 A 1994 action-comedy movie starring Charlie Sheen and Kristy Swanson that goes out of its way to lampoon pretty much every single media tactic to get the scoop on the latest breaking news story.

Jackson Hammond (Sheen), an escaped fugitive, has stopped for gas and a candy bar in an L.A. convenience store, when two LAPD officers walk in. Spooked, he grabs a woman in the store, takes her hostage, and flees with her in her car. Little does he realize he's just kidnapped heiress Natalie Voss (Swanson), unleashing the biggest police chase Southern California has seen in at least a week.

The plot resembles that of the 1955 movie The Fast and the Furious (not to be confused with the modern movie franchise of that name). And while there are some key differences, this movie also borrows liberally from the early Ron Howard film Grand Theft Auto - yes, the same film which (very loosely) inspired the mega-successful, hookercidal video game series.