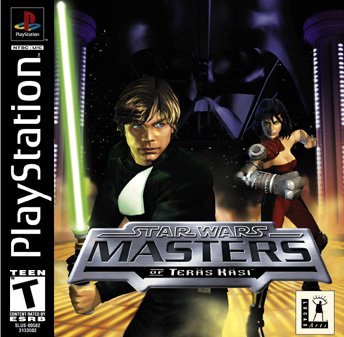 Star Wars: Masters of Teräs Käsi is a Star Wars Legends fighting game developed and published by LucasArts, which released for the PlayStation in 1997.

Taking place in-between A New Hope and The Empire Strikes Back, the Emperor seeks retaliation for the destruction of the Death Star and recruits the mysterious Arden Lyn (seen standing behind Luke on the game's cover) to battle in the art of Teräs Käsi, an unarmed combat discipline, against leaders of the Rebel Alliance. The game features Legends-exclusive characters, including the Emperor's hand-turned Jedi, Mara Jade.

There are 13 characters to choose from, small for a fighting game's roster, but they include perennial favorites such as Luke Skywalker, Darth Vader, Princess Leia, and Hoar.