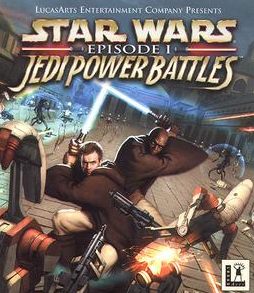 Star Wars: Episode I - Jedi Power Battles was first released on the Playstation in the year 2000 by LucasArts, and loosely followed the plot of Star Wars Episode I: The Phantom Menace. Perhaps the first Star Wars Legends game to allow players to play together as Jedi in a two-player, co-op romp through the various scenes of The Phantom Menace.

Each Jedi had their own fighting style, and small assortment of unique force powers, as well as the shared ability to block, and redirect shots back at the firers.

It was ported to the Dreamcast later that year with some changes, such as a training mode, and a vs mode. The game was also released on the GBA, two years later, as Star Wars: Jedi Power Battles.

This game has the following Tropes: