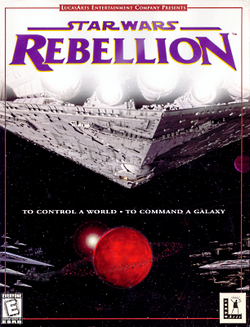 It is a dark time for the Rebellion.
Although the Death Star has been
destroyed, Imperial Forces have located
the hidden Rebel base on Yavin and are
poised to strike back.

On the planet Coruscant, the heart of
the Empire, Darth Vader and the
Emperor make plans to crush the rebel
Alliance once and for all. The full weight
of the Empire is about to come to bear
against the rebels.

In their secret headquarters, Alliance
leaders, resolute after their recent
victory, gather the warships of the rebel
fleet. Although they have won a
significant battle, the war between the
Alliance and the Empire has only just
begun....
Advertisement:

A 1998 Star Wars Legends Real-Time Strategy 4X game by LucasArts with a gameplay similar to Stars! (1995)

The player assumes the role of a military administrator and takes control over either the Galactic Empire or Rebel Alliance and must overthrow the other side. In order to balance gameplay, the sides are more closely matched than one would expect.

Special gameplay events include: Luke goes to Dagobah, learns of his heritage, teaches Leia about their family, and the two (along with Chewbacca) rescue Han if he gets captured by bounty hunters.

One of Rebellion's unique aspects which sets it apart from other games of its genre (and especially from the later Star Wars RTS Empire at War) is the heavy focus on gaining and maintaining the loyalty of planets rather than simply trying to take them all through brute force (in fact, brute force is often counterproductive).

Also known as Star Wars Supremacy in the United Kingdom and Ireland.

In 2016 FFG released a board game version that uses similar mechanics.

Tropes seen in this game include: