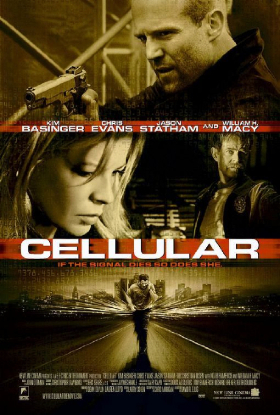 Ethan: "Who are you? How did you get involved?"
Ryan: "I just answered my phone."
Advertisement:

High school biology teacher Jessica Martin (Basinger) is kidnapped by Ethan (Statham), who is after her family for unexplained reasons. He and his gang lock her in an attic where he smashes the landline phone to avoid her calling out. She manages to jury rig the phone to be able to dial out again— but the rotary dial is destroyed, she can only tap out the numbers. Dialing blindly, she manages to connect with Ryan's (Evans) cellular phone. Ryan is an irresponsible commitment phobic trying to hook back up with an ex-girlfriend, he refuses to believe Jessica and thinks she's prank calling, but she pleads that if he hangs up she may not be able to reach anyone else at all. So he decides to believe her and take his phone to the police where they can decide if she's serious or not. Midway up the precinct's stairwell, he starts losing reception just as Ethan returns and starts hurting Jessica to find out where "it" is and where her husband is, and tells her he's going after her son. With no question of her and her son being in danger, Ryan undertakes a harrowing chase across the city to try to protect her son, discover why (and where) she's been kidnapped and avoid dying along the way.

All while avoiding losing cell signal and battery power.

Along the way, Sgt. Mooney (Macy)starts unraveling the trail of chaos left in Ethan and Ryan's wake, while investigating Jessica's kidnapping. He's about to retire, so...

There's a 2008 Hong Kong remake called Connected, directed by Benny Chan. It, too, is worth checking out.