Literature / The Rest Of Us Just Live Here 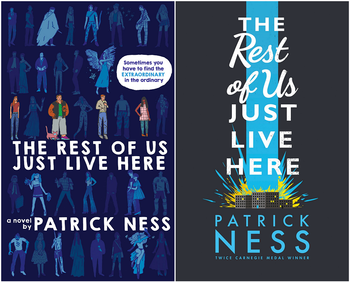 The Rest Of Us Just Live Here is a 2015 Young Adult fantasy novel by Patrick Ness.

What if you aren’t The Chosen One? ("Indie kids," in the book's parlance.) The one who’s supposed to fight the zombies, or the soul-eating ghosts, or whatever the heck this new thing is, with the blue lights and the death? What if you’re like Mikey, who just wants to graduate and go to prom... and maybe finally work up the courage to ask Henna out before someone goes and blows up the high school again?

Because sometimes there are problems bigger than this week’s end of the world, and sometimes you just have to find the extraordinary in your ordinary life.

Even if your best friend is worshipped by mountain lions...

The Rest Of Us Just Live Here contains examples of: