Literature / On My Honor 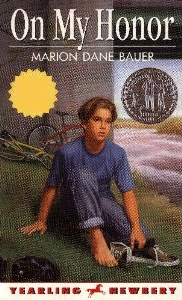 "On your honor?" Joel's father said.
"You won't go anywhere except the park?"
"On my honor," Joel repeated.
Advertisement:

A Newbery-honor winning book by Marion Dane Bauer. On My Honor was published in 1987 and is a common sight in many elementary school classrooms.

Joel Bates, the protagonist, is often flustered by his impulsive and reckless friend, Tony Zabrinsky. Joel asks his father for permission to accompany Tony on one of his typically risky excursions at the national park, expecting that his father will refuse. Joel's father surprises him by allowing him to go, but making him promise to be careful and to not stray from his destination.

Before the two boys even reach the park, it all takes a turn for the worse when Tony challenges Joel to a race in the Vermilion River. Joel makes it to shore, but Tony drowns. When Joel has to break the news to their families, he weaves a web of lies to absolve himself from being accountable. The rest of the book deals with Joel's feelings of guilt about being responsible for Tony's death and the struggle to come forth with the truth.