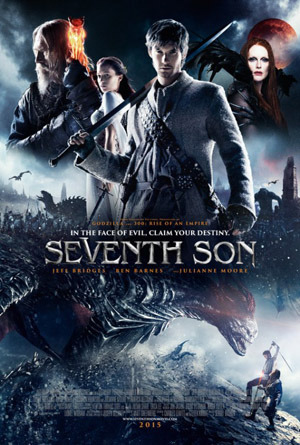 Seventh Son is a 2015 action-fantasy film directed by Sergei Bodrov and starring Jeff Bridges, Julianne Moore, Ben Barnes and Antje Traue. It is loosely based on the young adult fantasy novel series The Wardstone Chronicles. It follows the "spook" Master Gregory, a knight who hunts dark magic users and evil creatures, and his new apprentice Tom (the titular seventh son) as they battle a powerful witch queen, Mother Malkin.

It has no relation to the trilogy of science fiction novels with the same title, or the first novel of the The Tales of Alvin Maker series.