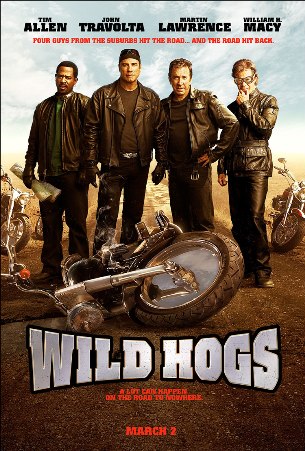 Wild Hogs is a 2007 comedy film directed by Walt Becker and released by Disney's Touchstone Pictures division. The screenplay was written by Brad Copeland.

The film is about a group of four men from Cincinnati, Ohio, who pose as a biker gang called the "Wild Hogs". Doug Madsen (Tim Allen) is a dentist who has trouble relating to his son Billy (Dominic Janes), Woody Stephens (John Travolta) is a rich lawyer married to a supermodel, Bobby Davis (Martin Lawrence) is a plumber who was forced return to work after having taken a year off to unsuccessfully write a book, and Dudley Frank (William H. Macy) is a single clumsy computer programmer who gets distracted by women but is unable to talk to them. When Woody learns that his wife is divorcing him and that his lawyer practice is shutting down, he decides to plan a cross country road trip with his friends to California. On their trip, Hilarity Ensues and they eventually run afoul of a rival gang, the Del Fuegos.