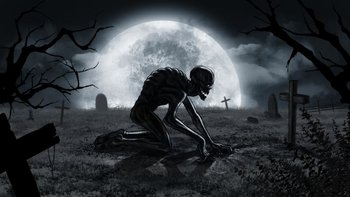 A Skin Walker, also known as a yee naaldlooshii (Navajo for "by means of it, he/she/it walks around on four legs") is usually a person with the supernatural ability to change their form into either an animal or another human being.

Being very similar to Werewolves and other paranormal shape changers, most skin walkers' abilities are largely powered by dark ritual, and the breaking of native taboos (such as cannibalism, incest, and murder, especially of family members) or are heralded to create them. Each nation's version differs in details. Most Skinwalkers are differentiated from their brethren by being able to take multiple shapes, but are not free-form shapeshifters. The myths usually describe them as humans who wear only an animal skin, or an abomination of human and animal forms.

Primarily detailed in many Native American tales, these entities are sometimes portrayed as either practicing witches, or aspects of the trickster deity (Coyote) or something worse, from the shared mythology of many indigenous American peoples. Skinwalkers are considered one of the most fearsome monsters from Native American Mythology. In those myths, they have a few extra powers, including Telepathy, Voice Changeling (mimicking animal and human sounds) and the creation of poisonous/disease ridden "Witch Powder" or the Magical Eye. Some cannot fully shift into their animal forms and have a deformity (awkward gait, over-sized feet, etc.) revealing their true nature.

Killing one is either simplified to accusing the creature in public while in human form (which robs it of power and it dies in 3 days) or an involved, lengthy ritual.

Related to Voluntary Shapeshifting, Magical Native American. Compare Wendigo, another monster produced by breaking an extreme taboo from further north. See also Our Werebeasts Are Different. Of late, it's been connected to Berserkers and more often than not, used as a shorthand by writers for "American Werewolf."

It is worth noting that actual information about these beings from Native Americans is incredibly sparse; they refuse to speak about it to outsiders for various reasons. Discussions about it even among Native Americans exclusively is rare. In some cultures, such as the Navajo, it's outright seen as taboo to even refer to these monsters by name. The information often applied to the entities in popular interpretation is effectively just extrapolation and exaggeration of the few known traits. In short, take what's known here and portrayed in popular culture with a grain of salt in terms of how "true" it is to the as-of-yet unknown parts of the wider mythology. Much as with wendigos for Algonquian nations, skin-walkers depictions are typically not met with much gusto on the part of Navajo audiences

, so creative descrition is advised.