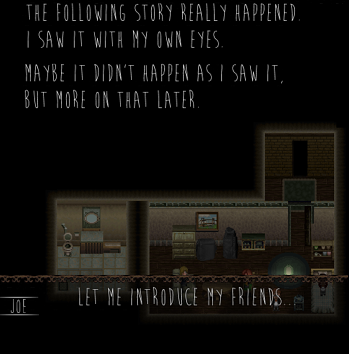 The opening lines of the game.
Skinwalker is a freeware Psychological Horror game made in RPG Maker by Snow Owl. It tells the story of four friends who go camping in the woods one weekend, only to have a horrifying encounter with a mysterious creature there.
Advertisement:

The game was originally released on March 13th, 2013, and can be downloaded here

Not to be confused with the trope Skinwalker (though this game does feature an example of this trope).