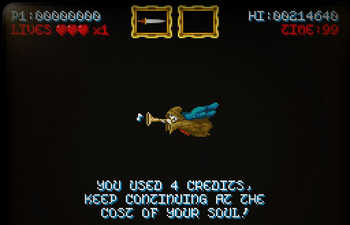 Death is not bluffing.
"My only consolation is that true death comes closer with each dying."
— The Alien Inventor, The Dig
Advertisement:

Let's face it: Death Is Cheap. If you die, there's always some alien artifact or magic spell or wish-granting being of immense power that's ready, willing and able to bring you back. Coming back as a shapeless, soulless horror? Never heard of it.

Sometimes, though, this nigh-immortality has other, no less dangerous caveats. If the number of times you can come back is limited, then you will eventually run out, and when that happens, you're as mortal as anyone else.

See also Living on Borrowed Time, where a character is already technically dead, but has had their life artificially extended. Compare Point of No Continues, where this essentially has a similar effect in video games — lose all your lives after this point, and it's Game Over.