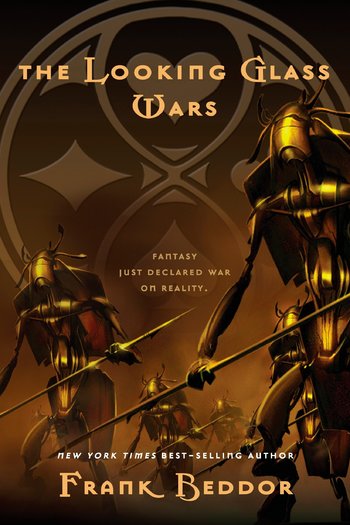 The Looking-Glass Wars is a trilogy of novels by Frank Beddor retelling the story of Alice in Wonderland, based on the premise that Alice Liddel, the real-life inspiration for the literary Alice, was in fact Alyss Heart, the true Queen of Wonderland, who had been exiled to our world after her Aunt Redd staged a coup.

With the memories of her homeland and true identity locked safely away in her mind, to the point that she no longer believes Wonderland ever existed, Alyss finds herself in the middle of a plot to retake Wonderland, aided by her royal bodyguard Hatter Madigan and her tutor Bibwit Harte.

The novels in the trilogy are:

Not to be confused with The Looking-Glass War, a spy novel by John le Carré.