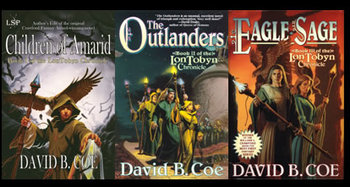 The LonTobyn Chronicle is a fantasy/cyberpunk series by David B. Coe. The story revolves around the Children of Amarid, mages in the land of Tobyn-Ser, a continent with a medieval society that sits across the ocean from Lon-Ser. In ancient times, Lon-Tobyn and Lon-Ser were one and were ruled by their namesake gods and brothers, Lon and Tobyn. But the brothers developed a jealous rivalry over Leora, the goddess of light and their father, Arick, split the world in half. The series' main conflict arises from the interactions with the cyberpunk society from Lon-Ser and the machinations of the evil mage Sartol.