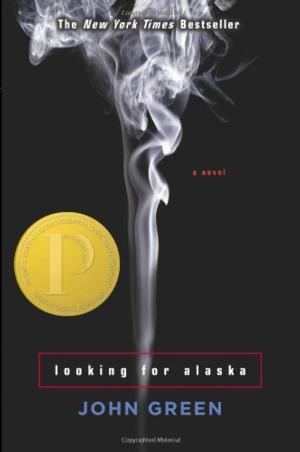 "I wanted so badly to lie down next to her on the couch, to wrap my arms around her and sleep. Not fuck, like in those movies. Not even have sex. Just sleep together, in the most innocent sense of the phrase. But I lacked the courage and she had a boyfriend and I was gawky and she was gorgeous and I was hopelessly boring and she was endlessly fascinating. So I walked back to my room and collapsed on the bottom bunk, thinking that if people were rain, I was drizzle and she was a hurricane."
— Miles "Pudge" Halter about Alaska
Advertisement:

Looking for Alaska is a Printz Award-winning young adult novel, and the debut novel by John Green, released in 2005. It is the Coming-of-Age Story of a boy named Miles Halter, who is nicknamed "Pudge" (so called because of his infernal skinniness) and has a hobby of memorizing the last words of famous people.

Pudge has had it with his boring Florida high school, where he has no friends, and has decided to take a chance on the more prestigious Culver Creek high school in Alabama, inspired by the last words of French writer Francois Rabelais: "I go to seek a Great Perhaps." There, he picks up a smoking habit, thinks about God, and makes friends — the bossy but jovial Colonel, the dry Takumi, the sweet and withdrawn Lara, and the beautiful, dangerous Alaska Young, the lattermost for whom Pudge falls quickly and soundly.

The book is unique for having Unusual Chapter Numbers based around a two-part structure: "Before", which counts down the days to the story's climax, and "After", which shows the characters' reactions. The style was inspired by a habit Green observed of people viewing their histories through the lenses of before and after important events, and by extension newscasters' statements that 9/11 would become such a dividing line for world history.

An official adaptation of Looking for Alaska was in the works for quite some time, with the initial rights to make a film of the book being sold to Paramount shortly after the book's release. The project was almost instantly shelved due to lack of interest from Paramount, but after the success of Green's breakout novel The Fault in Our Stars and its film adaptation, the studio reconsidered and the Alaska film began taking shape. It was slated to be directed by Rebecca Thomas with a screenplay by Sarah Polley and set to begin production early in 2016, but saw a perfect storm of issues, including casting and scheduling problems alongside tension between Green and Paramount

, that led to it being shelved seemingly permanently.

However, in May of 2018, Green announced that an Alaska adaptation would finally see the light of day — but for the small screen instead of the big, as an 8-episode limited TV series

based on the novel was optioned by Paramount. It was released through Hulu on October 18, 2019, and was helmed by Josh Schwartz (creator of The O.C.), who had been trying to negotiate an adaptation of the novel for over a decade. You can find the miniseries' page here.

Tropes present in Looking for Alaska include: