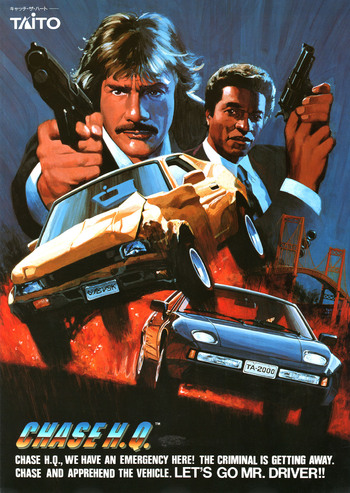 'Chase HQ we have an emergency here! The criminal is getting away. Chase and apprehend the vehicle. Let's go Mr Driver!!'
Chase H.Q. is a police-themed Arcade Game by Taito. It was released in 1988, with three sequels: S.C.I.: Special Criminal Investigation, Super Chase: Criminal Termination (which got a Super NES adaptation called Super Chase H.Q.), and Chase H.Q. 2.
Advertisement:

The player assumes the role of a police officer, à la Miami Vice, driving a custom Porsche with a two-speed gear shift and a turbo button on the side. In each of the five levels, the player has sixty seconds to catch up to the criminal, then another sixty seconds to ram his car until it is too badly damaged to drive.