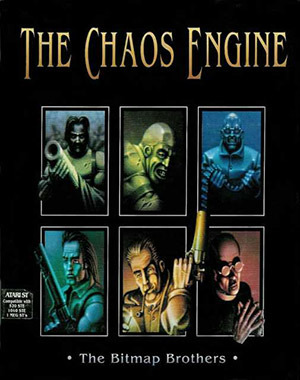 Sometime in the last century an experimenter with time space and early computers created a bizarre machine...
Advertisement:

The Chaos Engine (Soldiers of Fortune in the US) is a top-down shooter with RPG elements set in a steampunk setting, originally developed for the Amiga by the Bitmap Brothers and published by Renegade Software in 1993. According to the manual, a time traveller on a reconnaissance mission from the distant future became stranded in England during the late 1800s, and his technology came into the hands of Baron Fortesque, who wound up creating the titular Chaos Engine. Unfortunately, the experiment predictably went out of control, became self-aware, assimilated its creator and loosed an army of temporally-displaced creatures, robots and mutants.

Players choose two out of six mercenaries to fight their way through the monster-infested wilderness, the steam-powered city, Baron Fortesque's spatially distorted mansion, and finally the automaton-filled cellars containing the Chaos Engine itself. Along the way gameplay revolves as much around fighting monsters as it does solving puzzles and finding secrets, due to the pressing need to accumulate money to purchase weapon and skill upgrades.

A sequel was released in 1996, changing the gameplay from exploration-focused shooter with 2 character cooperating to a death-match game with both characters actively opposing each other. While praised at the time of release, the game is usually overlooked in favor of its predecessor.