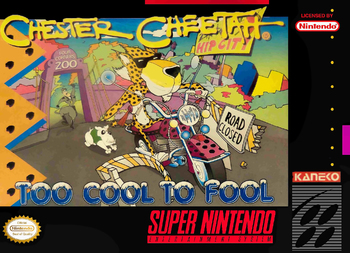 Chester Cheetah: Too Cool to Fool was developed by Kaneko and released for the SNES and Sega Genesis in 1992 to promote the Cheetos brand of cheese puffs.

The game stars said snack food's mascot Chester Cheetah, who is held against his will in Four Corners Zoo by a person named Mean Eugene. To complete a level, the player must collect a piece of Chester's motorcycle located somewhere in the level and then go to the level's exit with said piece.