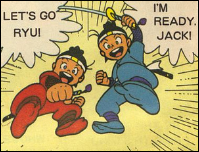 Super Chinese (known as Ninja Boy outside of Japan) is a little-known series of games developed by Culture Brain, starring young martial artists Jack and Ryu in their quest to protect their home of Chinaland, the world, and eventually the entire universe with the power of kung-fu and the help of an oddball cast of characters.

Super Chinese 2 introduced the unique gameplay that the series is known for, making it one of the earliest Action RPGs in existence. Eventually more Fighting Game elements were brought in with Super Chinese World 2, culminating in an update to the battle system, a VS. Mode, and eventually a spinoff. Super Chinese World 3 had the ability to select from "Command RPG" and "Action RPG" modes, which changed the plot in certain ways. These were also some of the first multiplayer RPGs in existence, with player one controlling Jack and the other playing Ryu.

The games were the subject of a comic series that ran in Game Pro magazine in 1990, as a promotion for the NES version of Super Chinese 2 (called "Little Ninja Brothers" in North America.) The comic gained a small bit of infamy by adapting the entire story of the game until just before the final boss battle, where it abruptly ends with a message telling readers that they'll have to buy the game if they want to see how the story ends.

Sadly, Super Chinese ran out of steam at the end of the 90's, and Culture Brain has moved on to the Casual Video Game market. The future of the series is uncertain, though there is the faint hope that the company's decision to develop games for the Nintendo 3DS

will lead to a revival.