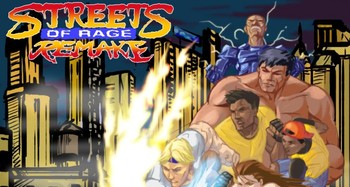 . Claiming itself as an unofficial remake, it's basically a mish-mash of the three games with a lot of original and remixed content added; to make room for all the levels, the game makes extensive use of branching paths. Highlights include being able to play as any character in the series so far (including Adam) and Multiple Endings.

After eight years of development, the group eventually released their work, only to be pulled down from the developer's site at Sega's request

(although details are sketchy, basic reckoning concludes that they did not want unsolicited competition for their eventual compilation re-release on Xbox LIVE), but not before having received wide coverage and spread with unofficial updates fixing the game. So don't worry, you can find it easily with a simple search.

Tropes exhibited specifically in this remake include: