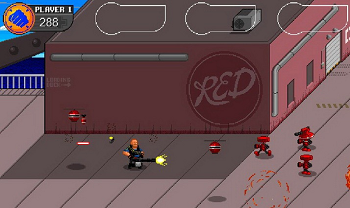 Team Fortress Arcade is a 2011 fan-made Video Game Demake of Team Fortress 2 created by Eric Ruth in the style of a classic arcade Beat 'em Up, complete with 16-bit graphics and up to 4-player Co-Op Multiplayer. All nine classes from Team Fortress 2 are playable, and there are nine side-scrolling stages, each featuring a different character from the opposing team as a boss, as well as a bonus tenth stage featuring a cameo appearance by Cave Johnson as the Final Boss.

It can be downloaded for free here