"At the dawn of the New Millennium, the planets aligned and heroes were born!"
— Intro Narration 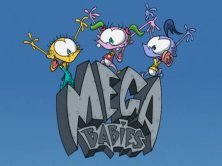 Mega Babies is an animated Gross-Out Show by Christian and Yvon Tremblay (the same people behind SWAT Kats) about a trio of infants who obtain superpowers. The show first aired in 1999 (on Teletoon in Canada and what was then Fox Family in the US).

One night, when the Solar System aligned, a bolt of cosmic lightning struck the Perfect Angels Orphanage where three newborns named Meg, Derrick, and Buck, along with their guardian, Nurse Lazlo, reside. The babies suddenly obtained incredible superpowers and Lazlo obtained an enhanced IQ. Together they try to defend Your City, USA from evildoers.