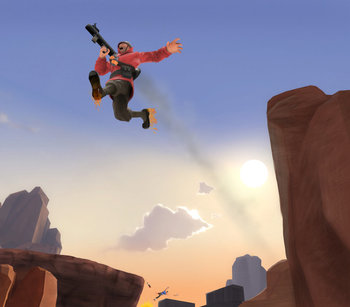 "SCREAMING EAGLES!!!"
"For the next three hundred years, people who needed to get to the second floor used the only method available to them: shooting a rocket launcher at their feet. Yes, it was ridiculous, crippling, and awful, but what are you going to do? Not go to the second floor? That’s where your bed is."
— Team Fortress 2, "The Gunboats"

A technique most commonly encountered in First-Person Shooter games, rocket jumping involves explosives (often rockets, obviously, but grenades or other explosives and items can be used in the same way) used to propel the player to normally unreachable places. Depending on the game, this might either be the only way to jump, or it has to be combined with timed jumps for full effect. Rarely is this practice implemented as a necessary skill in the game itself. When developers began realizing the potential of this trick, they thought to hide Easter Eggs and secrets with it. On the other hand, rocket jumping has also been used, with incredible effect, to completely humiliate structural efforts used by developers to streamline your gaming experience. Alternatively, a Rocket Jump can just function as a sudden burst of mobility, in order to swiftly engage or escape an enemy or evade an attack, or can be used to just propel oneself into the sky with less emphasis on a particular destination and more emphasis on invoking Death from Above while airborne.

In most cases, this technique will hurt the player, so he has to consider the sacrifice of health (including possible fall damage) versus the benefit of the jump.

With that in mind, rocket jumping is either considered as an exploit of a game engine processing physics and explicit numerical damage, or considered as an acceptable break from reality in video games that just emphasizes how tough your One-Man Army really is. The game has to take into account, among possible other considerations: movement across the 'z'-axis (3D) or Y-axis (2D), splash damage that produces a kickback effect on both the player character and enemies, that rockets do not kill in one hit as a specific function of being hit with a rocket, and that explosive damage is dealt rather liberally. At the very least, the game attempts and fails at properly applying or understanding impulse and momentum.

Compare with Jumping on a Grenade. An Ascended Glitch.

If you're here looking for the YouTube channel formerly known as freddiew, go here.