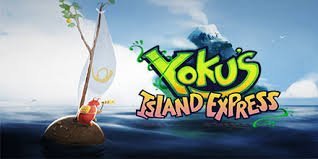 Yoku's Island Express is a 2018 action-adventure game from Swedish developer Villa Gorilla that melds the exploration and discovery-based design of a Metroidvania-style platformer with the play mechanics of pinball.
Advertisement:

Players assume the role of Yoku, a dung beetle who's sailed to Mokumana Island to become the island's postmaster. His plans to live an easy, sun-soaked island life are quickly interrupted upon learning that the island's local deity is severely injured and in a deep sleep, and its nightmares are producing storms and earthquakes. So, armed with his trusty ivory ball, Yoku sets out to find and correct the cause of the island's woes.

Yoku's Island Express's claim to uniqueness is that, despite the fact that it's an action-adventure game, its titular character cannot jump. Vertical movement is handled almost exclusively by pinball paddles, and there are frequent segments of the game where Yoku must conquer a traditional pinball table to advance. Outside of this mechanic, Yoku's Island Express is a traditional Metroidvania — the emphasis is on exploration, discovery, puzzle solving, and gaining new abilities that open up new parts of the world.