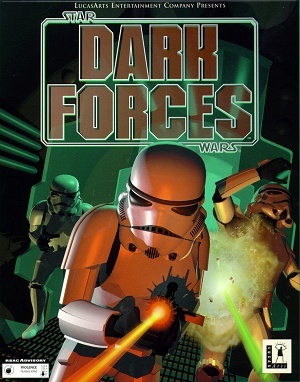 "You're not authorized in this area!"
The New Order of the Empire stretches
its evil clutches across the galaxy,
consuming planets with devastating
results. Through many struggles, the
Rebel Alliance has learned of a new
Imperial battle station, the DEATH
STAR, with enough power to destroy
an entire planet.

Unable to acquire the plans to the
deadly space station, the Rebels have
employed the skills of Kyle Katarn.
Known to most as a mercenary for
hire, Katarn is a rogue figure who has
a partial alliance with the Rebels.

Armed only with a blaster pistol and
an intimate knowledge of Imperial
methods, Kyle prepares to infiltrate
the Imperial base where the plans are
kept...
Advertisement:

Star Wars: Dark Forces (1995), the first game in the Dark Forces Saga, is a standard FPS with the trappings of the original Star Wars trilogy. It is an origin story for series protagonist Kyle Katarn, a spy working for Mon Mothma, leader of the Rebel Alliance.

The intro showcases Katarn as the one to steal the plans for the first Death Star and transmit them to the rebellion, thus leading into the events of A New Hope (Sound familiar?). Afterwards, the game time-jumps to after the Death Star's destruction and goes its own way, uncovering the Emperor's top-secret "Dark Trooper Project."

The game was a dramatic leap for graphics and level design, being one of the first to feature multiple floors. It was also one of the first successful examples of looking up and down, as well as jumping.