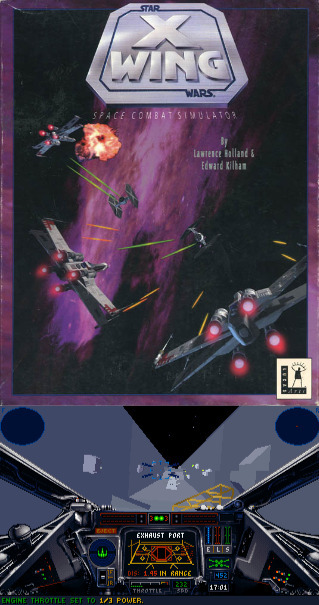 Will you make that one-in-a-million shot?
It is a period of Civil War.
Using fear and intimidation,
the Empire seeks to impose a
New Order on the galaxy. Only
the Rebel Alliance stands in
the way of their evil plans.

Not yet willing to confront the
Empire directly, the Rebels are
marshalling their forces in
secrecy. Even now a group of
their prized Calamari Cruisers is
being intercepted by a squadron
of Imperial Star Destroyers.

The Rebel Fleet is outnumbered
but, they have a surprise…
the X-Wing Starfighter!
Advertisement:

X-Wing is a Star Wars Legends PC Space Simulation Game first launched in 1993, with various expansion packs and collector's editions being released as late as 1997.

The history of the game itself goes back to the early 1990s, when LucasArts approached game developer Lawrence Holland

and his studio, Totally Games!

to develop a series of games for the publisher. The first games were actually World War II flight simulators including Battlehawks 1942 and perhaps Holland's best known non-franchise game, Secret Weapons of the Luftwaffe. These games became instant classics, and in the meantime Holland was working on a 3D rendering engine specifically for flight sims, something that back in 1992 was revolutionary.

This prompted LucasArts and Holland to develop a flight (or rather space) sim game using both this engine and the Star Wars license, and X-Wing was the result.

Initially the game lets you fly either an X-Wing space superiority fighter, Y-Wing assault fighter or A-Wing high-speed interceptor. A later expansion pack adds the B-Wing heavy assault starfighter, which is a vast improvement over the Y-Wing, as well as extra missions rounding the campaign to 50 total and bringing the game up to just before the Battle of Hoth. X-Wing has the distinct honor of being the first Star Wars game with an original plot, with only the final missions of the base game being an almost direct adaptation, recreating the climactic assault on the Death Star from the original film.

The game's missions are much more complex than simply destroying all enemy ships. Besides capital ships needing to be hit in vulnerable areas for the best effect, the Empire's ships are often scripted to use flanking maneuvers and feints or to prioritize one of your own capital ships rather than you, to the point that some missions revolve more around solving puzzles than Old School Dogfights. As a reward, players are able to participate in the attack on the Death Star during the final missions.

A year after release, a sequel was released that allows you to play for the evil Galactic Empire: TIE Fighter. Another two years after that, players would also have a chance to hold multiplayer competitions with X-Wing vs. TIE Fighter, the engine ofw hich would also serve as the basis for an Updated Re-release of this game and TIE Fighter. The last game in the series, X-Wing Alliance, finally allows players to pilot the legendary Millennium Falcon, and ends with the Battle of Endor from Return of the Jedi.

If a player is shot down and fails to eject in time, they are subjected to a scene of their funeral, where the coffin containing their remains is lowered into the atmosphere of a nearby planet and cremated via re-entry.

Example of:
Burial in Space

If a player is shot down and fails to eject in time, they are subjected to a scene of their funeral, where the coffin containing their remains is lowered into the atmosphere of a nearby planet and cremated via re-entry.