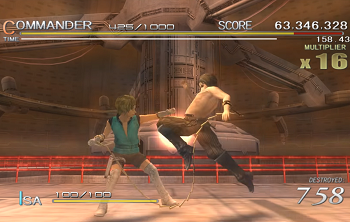 Just your typical Rail Shooter boss.
"At last, we can fight as warriors. Hand-to-hand: it is the basis of all combat. Only a fool trusts his life to a weapon."
— Gray Fox, Metal Gear Solid
Advertisement:

You made it to the boss. Now you're going to use your most powerful weapon to easily beat it, right? Wrong! Every weapon except your fist (or, depending on the game, your basic melee weapon) is either disabled, removed, or unusable. Basically, this is the Duel Boss meets No-Gear Level. This can be a form of Fake Difficulty, particularly if it involves a Unexpected Gameplay Change (you never had to/have been able to use your fists before). Expect a speech or two about how Good Old Fisticuffs is the one true form of combat.

The two (In-Universe) major reasons are either:
1) The Hero lost all their equipment during or before the battle, leaving only their most basic items.
2) The Hero and the Big Bad have thrown everything they've got at each other, their ultimate weapons, ultimate attacks, drained their strength or magic pools, wrecked all their equipment, and still haven't put each other down, so the only thing left that they can do is punch each other.

The true reason might be that the author wants to show that the Hero's win wasn't due to only his weapons and attacks, that he and the Big Bad aren't so different (if they both finish the fight with only punches or their first weapon), to make a comment on the futility of the fight (and violence in general), or to evoke a sense of David vs. Goliath.

May overlap with Where It All Began, to further the symbolism. For a literal fisticuffs boss, see Giant Hands of Doom.