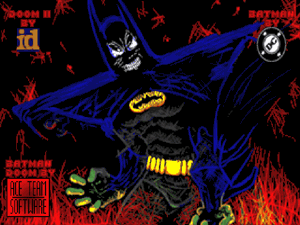 puts you in the shoes of (guess who?) Batman; specifically, the mod's plot is (very) loosely based on the Knightfall comic book storyline. It was released in 1999 by the ACE Team who, years later, went on to make Zeno Clash and Rock of Ages.
Advertisement:

The game is divided into chapters, each of which involves Batman stopping the machinations of a prominent villain from his Rogues Gallery and eventually facing the villain as a boss.

Batman Doom remains one of the most acclaimed mods for Doom II, in part due to its Genius Programming, which is apparent to anyone with expertise in Doom editing; while modern source ports give the modders wider flexibility and freedom, the original Doom engine is notoriously inflexible, and yet ACE Team have managed to achieve some truly mind-bogglingly difficult tricks with it.

Because this mod relies heavily on complex DeHackEd patches, it doesn't play nicely with many modern source ports unless they're extremely vanilla-focused, such as PrBoom

or the intended Crispy Doom

. However, a fan-made patch

exists for ZDoom-based source ports that rewrites most of the DeHackEd patches in equivalent DECORATE scripts in order to fix the compatibility issues, as well as a "Plus" version that adds new enhancements to the mod.

" is also in the works which aims to completely remaster and modernize the mod with the GZDoom source port in mind.

This mod exhibits the following tropes: