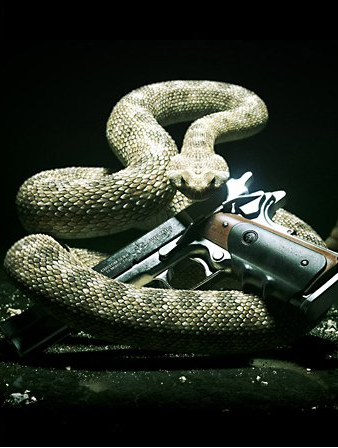 "I shall not refer to him as 'my target'.
Nothing so clinical will do. This is personal."
Advertisement:

Hitman: Absolution (2012) is the fifth game in the Hitman series by IO Interactive, and the only one to be (exclusively) released for the seventh generation of consoles.

We open in Chicago. Mr. 47 is sent to kill his handler, Diana, who has unexpectedly gone rogue and flushed The Agency's accounts. With her dying breaths, Diana reveals she's been protecting a young girl, Victoria, whom The Agency is grooming as an assassin. His job done, 47 mulls over the debt he still owed Diana, and he assumes her role as Victoria's guardian. Now, 47 is the one to turn rogue... and The Agency will stop at nothing to get their property back.

The plot is more 'grindhouse' than Hitman is generally known for, with a heavier emphasis on action. Whereas the old cast would feel right at home in The Replacement Killers, these characters are ripped straight from Machete, with a third of the game spent avoiding polizia in the desert. Along with the graphics, the gameplay got a major facelift: This is very much a modern shooter, with more linearity (instead of single sandbox map, each mission is divided into segments), QTE battles, stop n' pop, and scripted spectacle events. Here's the rundown:

On the multiplayer front, there was an online mode called Contracts which let players create different, well...Contracts for each other. The gist of it was you could load any of the missions found in the game and set new objectives. You could mark up to three random NPCs found in the level as targets, kill them and then leave via an escape route of your choice. It was a modest way of adding 'multiplayer' to a single-player game while keeping Square Enix's server costs down.

An Updated Re-release of the game is part of the Hitman HD Enhanced Collectionnote Released January 11th 2019 for Playstation 4 and Xbox One, along with its predecessor Hitman: Blood Money. Both games run on 4K and 60 FPS, and come with various other graphical improvements such as shadow quality.