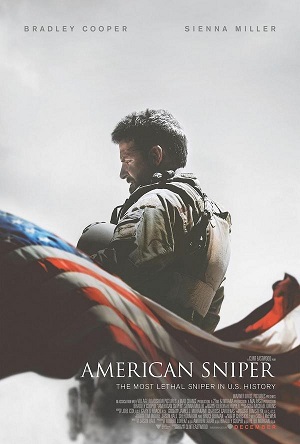 There are three types of people in this world: sheep, wolves and sheepdogs.
Advertisement:

The film is based on the autobiography of the same name by Chris Kyle, a Navy SEAL who achieved fame (and infamy) for becoming the most lethal sniper in US military history. The film follows him through his four tours in Iraq and depicts his struggle to balance his single-minded mission to protect US military personnel with his desire to be a good husband and father.

The movie was given a limited release on December 25 and a wide release on January 16. To the surprise of many, (including the film's director) the film went on to become a major runaway success at the box office. Going on to become the highest grossing war film of all time, and Eastwood's highest-grossing film to date. However, it also drew considerable controversy over its depiction of both the Iraq war and Chris Kyle. The trailer can be seen here