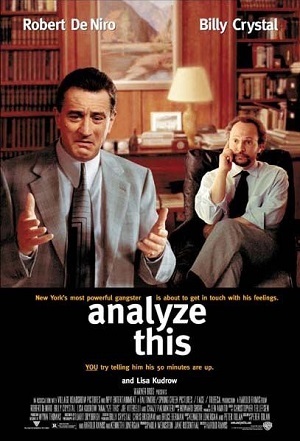 Paul Vitti (De Niro) is a high-ranking mafia member, involved in organizing the first nationwide summit since 1957. The Mafia is under threat by the FBI, as well as by their Chinese and Russian rivals in organized crime. Vitti also has to avoid assassination attempts by young upstarts. Meanwhile, psychiatrist Ben Sobel (Crystal) is agonizing over his problematic relationship with his son, how boring his patients are and his upcoming second marriage.

When Vitti starts having panic attacks, a first in his life, he deems psychiatric help is in order. Sobel is the lucky psychiatrist chosen for the job. Sobel's life is more or less taken over by his needy patient, who has no problem having his thugs regularly abduct Sobel for their sessions. More trouble comes into his life when the FBI decides to turn the psychiatrist into their newest informant.

The film is well-regarded for its partly serious and partly humorous look at the stress and depression of De Niro's character. It was also a commercial hit and received a sequel, Analyze That (2002). While not a complete flop, the second film was a critical failure, killing the idea of another sequel.

Interestingly, released the same year as the start of a TV series involving a Mafioso going to a psychiatrist after having a panic attack. Whether one inspired the other, or it was just coincidence, or if there was just "something in the air" isn't entirely clear.

Analyse This provides examples of the following tropes:

Dr. Sobel imagines hurling abuse at a patient of his.

Dr. Sobel imagines hurling abuse at a patient of his.