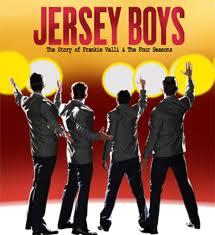 Jersey Boys is a slightly documentary-ish Jukebox Musical telling the story of the four signature band members of Frankie Valli and the Four Seasons, their lives, their rise to fame, and where they are today. The story provides many good excuses to feature many of the Four Seasons' hit songs.

Debuting on Broadway in late 2005, the show has won four Tony Awards (Best Musical, Best Leading Actor in a Musical, Best Featured Actor in a Musical, and Best Lighting) and as of 2014, has become the 13th longest running show on Broadway. It has had production runs in London's West End, Las Vegas, Chicago, Toronto, Melbourne, Sydney, Philadelphia, Auckland and Brisbane. A film adaptation directed by Clint Eastwood, starring John Lloyd Young as Frankie Valli (reprising his Tony-winning role), Vincent Piazza as Tommy DeVito, Erich Bergen as Bob Gaudio, Michael Lomenda as Nick Massi, and none other than Christopher Walken as mob boss Gyp DeCarlo was released in 2014. On September 6, 2016, it was announced that the Broadway production would close on January 15, 2017 and that Mark Ballas would be the final Frankie Valli beginning October 18, 2016.

"You'd think after everything that went down, Frankie would have cut Tommy loose right then. If that's what you think, you're not from Jersey."