Video Game / Blacksad: Under the Skin 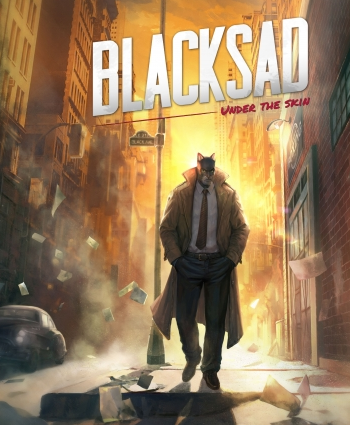 Blacksad: Under the Skin is a 3D cinematic Adventure Game, based on the Spanish noir comic book series Blacksad. In the comic's continuity, the game serves an Interquel, taking place chronologically between the stories Arctic Nation and Red Soul. It was developed by the Spanish Pendulo Studios (known for Runaway: A Road Adventure) and released for PC, PS4 and Xbox One on November 14th, with a Nintendo Switch version to follow on December 10th, 2019.
Advertisement:

In it, New York detective John Blacksad is hired by Sonia Dunn, the leopard owner of a boxing club who inherited it after her father, Joe Dunn, was found dead in a suspected suicide. The job consists of investigating the disappearance of the club's star boxer Bobby Yale, who was about to fight in the biggest match of his career; if he won, the reward would have saved the club from its long-standing financial woes. Instead, she finds herself on the brink, and Blacksad, who is also largely broke, must go to the seediest underbelly of NYC in order to locate Yale.