Video Game / Caper in the Castro 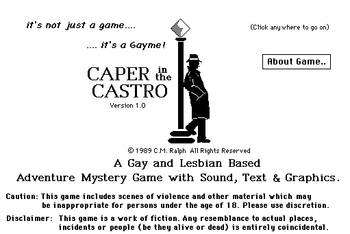 "It's 3:05 am. You have just been awakened by a phone call from your old friend, Tessy LaFemme. She sounded frantic and asked you to meet her in front of The Gayme Room, (a favorite hang-out of yours.) She said she'd be there in 15 minutes. She started to say something about getting the goods on Dullagan Straightman (notorious fiend & villan) but before you could ask Tessy what she meant.........she was cut off."
Advertisement:

Believed to be the earliest LGBT video game, Caper in the Castro was released in 1989 by C.M. Ralph as "charityware" with the request that the player donate to an AIDS foundation as payment. Played worldwide yet only commercially published as a censored, hetero version "Murder on Main Street", this piece of gaming history seemed lost to time until a rediscovery of a hard copy in 2017. Both original and censored versions have since been publicly uploaded onto the Internet Archive

for all to enjoy.

As for the gameplay, it's a mostly point-and-click mystery adventure chock full of queer inside jokes and graphics impressive for its obscure, now dated hypercard programming.

Caper in the Castro contains examples of: