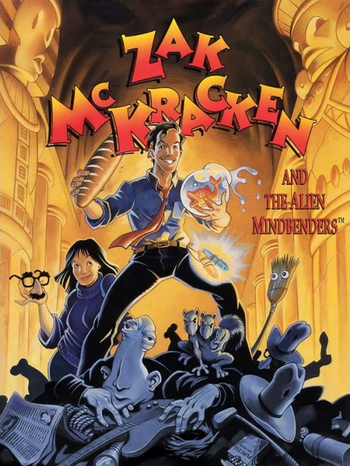 See Ya.
Can one hack writer, two Yale coeds, and a stale loaf of french bread save the world from a galactic conspiracy? Not without your help.
— Cover blurb
Advertisement:

Zak McKracken and the Alien Mindbenders is an Adventure Game by LucasArts, released in 1988. It is the second SCUMM adventure game, preceded by Maniac Mansion. Originally released for the Commodore 64, it was ported to the IBM Personal Computer, Amiga, Atari ST and FM Towns.

The game tells the story of a tabloid journalist named Zak, who has a dream about space aliens on Mars, who wear ten-gallon hats and Groucho Marx nose glasses. When he awakens, he finds himself uncovering a conspiracy by the alien Caponians, who are using the Phone Company in a not very hidden plot to try and Take Over the World.

Yeah, it's that kind of story. It is also very inspired by New Age themes such as Atlantis, Aliens, Crystals, Telepathy, and the Giant Face on Mars, as well as the outrageous tabloid the Weekly World News.

The game featured many technical improvements on its predecessor, including a storyline that takes Zak all the way around the world, and an interesting system whereby the various characters have adventures independent of each other (two of the playable characters are introduced as space adventurers on Mars, literally a world away from the bits with Zak).

Tropes Used In This Game Include: