Stuck on a Ski Lift 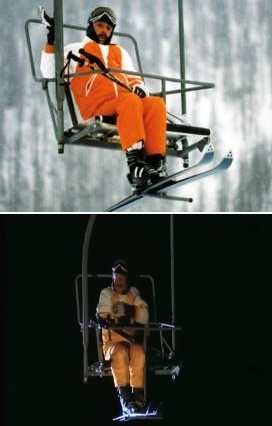 A common Sitcom Trope. The protagonist(s) take a ski lift (most often of the chairlift

kind) and, somewhere in mid-trip, the cableway stops — typically with the passengers too high to safely drop.

In Real Life such incidents hardly ever last very long, since ski patrol usually responds instantly to either restart the lift / use ropes to lower guests to the ground. But in comedy or drama, there's always some complications.