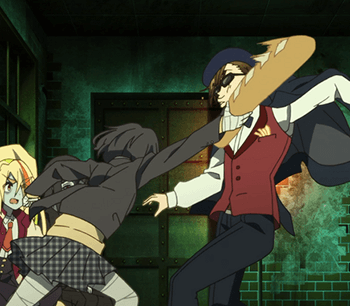 Violence is her bread and butter.
Advertisement:

The hero is walking away from his triumphant victory at the local grocer with his spoils and is attacked. He has no weapon to defend himself with, but fortunately he just bought some ISO-Standard Urban Groceries, so he improvises and pulls out his trusty baguette to demonstrate that pain is not just the French word for bread.

After all, bread is the staff of life. Bonus points if the opponent grabs one too, cuing a Sword Fight. Same if the victor takes a bite of the weapon on the way from the battlefield.

A Sub-Trope of Nerf Arm, Edible Bludgeon, and Food Fight. A person using such a weapon may be a Chef of Iron, while anyone who can bake a loaf capable of concussing someone is a Lethal Chef.

Not what is meant by a Cockney hitting someone with his "Brown Bread".