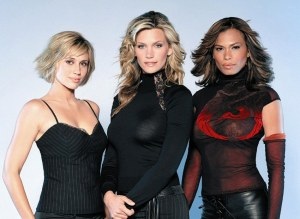 She Spies was an action/adventure/comedy series that ran in syndication for two seasons. The premise was self-described as "three beautiful ex-cons saving the world on an almost weekly basis."

The main characters were three beautiful women (Cassie [Natasha Henstridge], a confidence woman; D.D. [Kristen Miller], a computer hacker; and Shane [Natashia Williams], a burglar), who were released from prison on the terms that they would work for the government as spies.

The two seasons were markedly different in tone. The first season (which involved graduates of Moonlighting and Duckman behind the camera) was light-hearted and comedic, with a great deal of tongue-in-cheek humor and exploitation of spy-genre tropes that to the point that the characters were aware of them and constantly doing Lampshade Hanging Breaking the Fourth Wall.

The second season, involving producers from Tower 12 Productions, was essentially a series reboot — in the first episode the girls learned that Jack (the equivalent of Bosley in the inevitable Charlie's Angels comparison) had been reassigned, headquarters had been completely remodeled, and their residence had been moved. Basically, the only things remaining unchanged were the general premise and the three lead actresses. The tone of the series changed to a straightforward action/adventure series, with much less of the trademark humor that was the first season's greatest asset. The cast weren't too thrilled at the change and it seems that many fans agreed, as the show didn't survive past the second season.