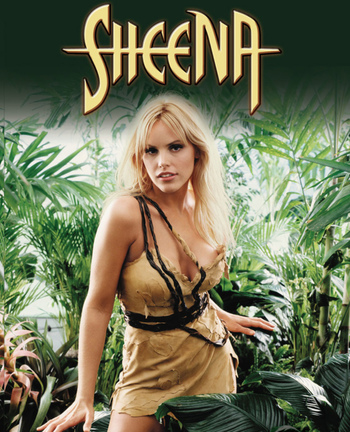 Sheena was a 2000-2002 television series that ran for 2 seasons in Syndication. Created by Steven L. Sears (a producer of Xena: Warrior Princess) and Douglas Schwartz (one of the creator of Baywatch) it revived the concept from the Sheena, Queen of the Jungle comic book and 1984 film. The show stars Gena Lee Nolin as Sheena, with John Allen Nelson as Deuteragonist Matt Cutter, Kevin Quigley as Mendlesson, Cutter's business associate and sidekick and Margo Moorer as Kali, Sheena's mother figure and resident Witch Doctor.

Alone in the jungle at a young age, Sheena was taken in by the Shamaness Kali who raised her in the ancient tribal ways, and taught her the ways to morph into an animal at a moment's glace. Because the tribe and the jungle animals are always at odds with the encroaching civilization, Sheena covers herself in mud and puts on fake claws and a mask to pretend to be the Darak'na- a mythical killer residing in the La Mista jungles and mountains.

Sheena finds a friend in Matt Cutter who provides safari and other business tours in Africa. Due to a troubled past, he is a cynic, but he is also a ladies man, and would do anything for a good amount of money.