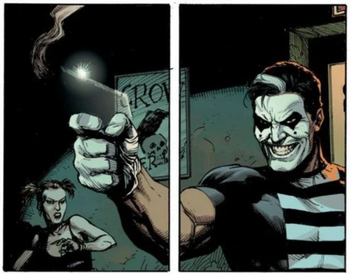 The villain of the work is a dastardly white-faced, beret-wearing mute with world domination on his mind. Occasionally they are motivated by a lesser goal, but still, evil... and almost always French. A possible reason for this is that the late Marcel Marceau (the most famous mime in the world) was French, despite him being a beloved figure who was actually heroic, having saved Jewish children from The Holocaust during World War II, using mime to keep them quiet while they were waiting to be smuggled out of occupied France.

Some Enemy Mime villains have Your Mime Makes It Real powers, such as the ability to erect an invisible wall or conjure an unheard gale-force wind which one must walk against. Others simply use gadgets to leech the world of sound and color, and hope and fluffy things right along with it. May or may not be affected by the "silence" condition when fought against. Really, any mime-like character will count.

A Sub-Trope of Monster Clown and Grayscale of Evil.

Compare to the following tropes:

Contrast with Heroic Mime (a hero who doesn't speak, and probably isn't a mime). Not related to Enemy Mine; the name is just a pun on that trope.